The most important part of the project "Protectin of the English oak in the crossborder area", the acronym "Oak protection" is an ecological study. The 146 pages of text, tables, figures and diagrams scientifically deal with the state of forest and aquatic ecosystems of the Koska forestry with recommendations for management adaptation in climate changes. The study was created by experts from contracted companys Perceptives and Biota with the help of experts from the Faculty of Forestry, University of Zagreb and the employees of the Forest Administation Branch Našice.

For the purpose of the study, fieldwork was carried out, which included investigating the structure of stands on the test plots, determining the growth of pedunculate oaks, analyzing the features of forest soils, and field research on the status of aquatic ecosystems. Data on forest stands and performed forest work were taken from the Croatian Forests database, and data on LiDAR imaging were processed, which was performed twice for the study area: in April 2018 and in April 2019.

During the preparation of the Study, the planned coverage in the Koška Forestry area was extended to a part of the Donji Miholjac Forestry Area, which is also part of the FAB Našice. Additional work included stand analysis as well as processing of LiDAR imaging of the area for the purpose of determining potential locations for the implementation of hydropower measures.

These analyzes have identified several key problems that foresters are already facing in the management of English oak stands both in the investigated area of ​​Donji Miholjac and Koška forestry areas, as well as throughout its whole area in Croatia.

The study elaborates measures for the adaptive management of oak stands in the medium-term period of time to increase the resistance of the oak stands at the upcoming climate change. In particular, this refers to defining potential locations for implementing so-called hydro-adaptive adaptive measures to reduce hydrological extremes in terms of climate change..

Shelterwood cutting on smaller areas does not significantly change the microclimatic conditions, which means that the evaporation of water is significantly less than for felling on larger areas. In the face of future climate change and in dry periods, this will be a significant measure of water conservation in the system required for the advancement of young pine trees. Fertile felling on smaller areas increases the stand's resistance to storm winds, reducing damage to the most valuable English oak trees.

Increasing the diversity of tree species in forest stands

By increasing the number of tree species in future forest stands of Koška Forestry we can avoid potentially large damage to English oak stands that could occur if new pests emerge in these stands, or if climatic conditions favor the gradation and unusually high numbers of some pests that have not so far caused more damage.

If care is taken from the very foundation of the oak stands to provide the necessary space to each English oak tree, these trees will be able to develop the proper crowns of the required size and develop a root in the soil that can respond to changes in groundwater regimes.

When restoring oak stands, genetic material with significantly greater genetic diversity should be used. This increases the possibilitys in responses to changed conditions that will dominate in this area in 30 or 100 years, as the greater genetic diversity of forest reproductive material provides a greater range of genetic constitutions, thus increasing the adaptive capacity of trees to future changes. 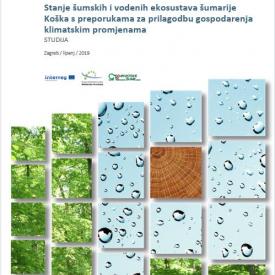